What Happened Globally When Bezos Took The 11-Minute Trip to Space? 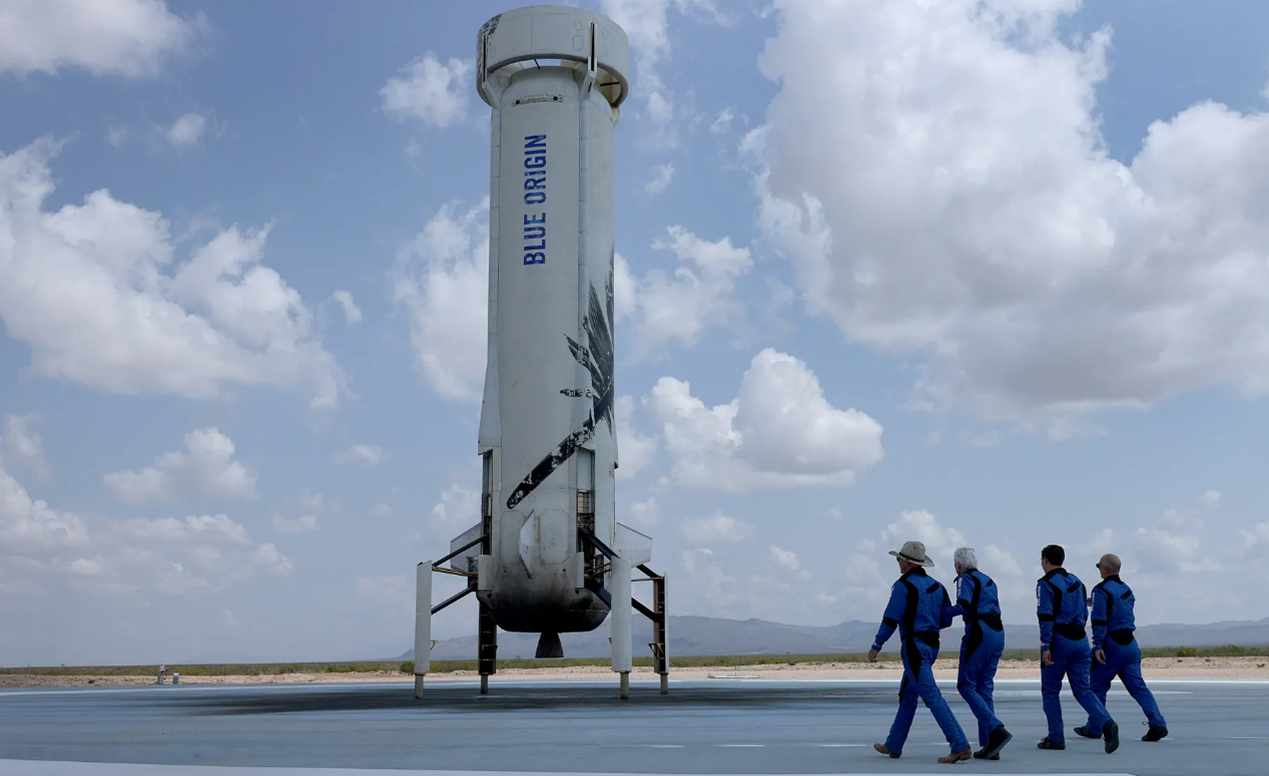 Taiwan officially entered Level 3 COVID-19 alert in the middle of May in 2021. Transportation across cities and dining-in were forbidden. People even got warned for visiting families in hometowns and friends living next door. All kinds of relationships become “long-distance”. It doesn’t take place solely in Taiwan. Many countries out there are/were doing the same to fight Covid-19 to be back with their loved ones. Pandemic hasn’t been fully contained due to the lack of vaccines around the world, that death toll is still climbing. The world is experiencing a torturing trial, with people pay attention to the latest update of covid-19.However, someone is waiting for the global attention on himself.

The billionaire,Jeff Bezos, made a short journey to space, in the first crewed flight of his rocket ship, New Shepard at 14:12 BST (09:12 EDT), 20th, July 2021. He was accompanied by three other people to experience an amazing gravity-free space journey. The capsule continued upwards towards the Karman Line and reached the highest point of 106 km. When you thought the capsule was about to fly to the universe, nope, New Shepard slowly went back down to the earth. It was an eleven-minute journey with a seat costing 28 million.

The unimaginably sky-high pricing space journey was not exclusive to Bezos. Elon Musk, one of the richest men, and the tycoon Richard Branson are planning to launch their own rockets one after another as they are having fun in the space competition but totally a game that is out of people's league.  However, such games were not enjoyed by the audience as much as they do with the Tokyo Olympics. It got criticized a lot on twitter, and people even drew up a petition “Do not allow Jeff Bezos to return to Earth”, which was supported by nearly 20 thousand people in a short time.Why is that?

Aerospace technology has been developing swiftly. The rocket, a launch vehicle, seems to become a new toy for the bigwigs for astonishing travel. With the rise of demand, several aerospace companies are selling tickets. Blue Origin has sold more than 100 million USD dollars for airfare. According to other aerospace data, there will be rocket flight to space every 32 hours in 2023. However, the nitrogen oxides emitted by the driving rockets and GHG is four to ten times that of the largest biomass power plant in the UK. Coupled with a large amount of water vapor accumulated in the ozone layer, if space tourism becomes the norm in the near future, it will greatly exacerbate global warming.

China was flooded from 17th to 20th in July, leaving houses, subways devastated and taking at least 302 lives, 50 people went missing. It is literally more than a year's worth of rain.

On 12th  July, catastrophic floods started taking place in Western Europe. The flood began in the UK and later affected the Netherlands and other river basins across Europe including Switzerland, and Luxembourg and caused 229 deaths to date. Belgium and Germany are severely damaged, with the death toll nearly 200 and more than 700 people were wounded.The flood also reached Northeastern Italy and caused damage to agricultural crops, streets became muddy rivers. The damages extended all the way to southern Europe.

Not just Italy,such disastrous landslides also took place in Japan. On 3rd July, Shizuoka,Japan, with the breath-taking scenery of Mt. Fuji was severely damaged  by continuous heavy rain, causing large-scale landslides and destroying 131 houses with 22 people dead and 5 missing as of 2nd August.

Italy did not only face landslides but also flood and drought at the same time. The raging wildfire on Sardinia, on the other side of Italy, was spreading rapidly,burning 20 thousand hectares at least of forests, which equaled three quarters of Taipei City. 1500 people were evacuated and the neighboring France and Greece also dispatched firefighting aircraft to assist Italy.

The heat wave almost hit entire southern Europe. Greece is also suffering from the wildfire with 50 fire accidents within 24 hours. Local meteorologists said that the 2021 heat wave hasn’t ceased, and more fire will ensue in the summer. Fierce fire also swept Spain, burning 2500 hectares of land in Spain. However, wildfires occur in Portugal every year. According to a joint report from WWF and ANP, an average of 136 thousand hectares of forest will be burned down each year, which is nearly five Taipei cities. Undoubtedly, wildfires are mostly seen in Portugal, leaving people there under a blazing ordeal.

Turkey, close to the Mediterranean, could not escape from the catastrophe either. The heat wave brought an unprecedented trial On 28th July, 8 went missing. 95 thousand hectares are burnt down from more than 100 fires.

Starting from 23rd July, 90 wildfires provoked by drought and lighting in northern America,burning down over 73 thousand hectares of forests, which is nearly the sum of New York, Los Angeles and Chicago.

Even though covid-19 pandemic is horribly devastating, we can still implement a national lockdown to stop the virus from entering or spreading out. How about global warming? From any example above, it’s evident that no country is excluded. The movie “An Inconvenient Truth” in 2006 casting Al Gore, ex vice-president of US,had boldly predicted the climate crisis brought by global warming and confirmed“the extreme climate like a disaster movie is being staged all over the world”is actually true to us. The movie won the Academy Award for best documentary.Yet, it’s not just a documentary movie, instead, it’s happening right now.

The scene in the movie where the sea level rises, and the storm flooded the 911 Memorial Museum was controversial and criticized “way too exaggerated and untrue” by the audience. Later in 2012, An Inconvenient Sequel was released with Hurricane Sandy flooding into the 911 Memorial Museum at the beginning of the trail,meaning the prophecy came true. The sequel aimed to awaken the people to protest against those in power and oppose and try to stand out against Donald Trump for the importance of renewable energy and zero emission. To call on the world not to believe in moving to Mars, instead, we should protect our communities – the Earth for the next generation.

Does this sound familiar to you? Your right, it coincides with the core idea “Don’t Go to Mars,Stay with Your Loved Ones on Earth.” of DGM. Besides billionaires, who else can enter the space, which costs 28 million dollars for an 11-minute trip? We, DGM,believe protecting the earth is worth more public attention than that of pursuing a personal go-to-space goal.

The Earth has been warning for decades by abnormal rains, floods, landslides, heatwaves, drought and wildfires. They are no longer news to us. Several environmental scientists have proposed statistics, graphs and live images that all show how critical the earth is. UNFCCC officially announced that global weather has entered “Red Alert”, meaning that more summits, environmental slogans and moving-to-another-planet plans are totally useless to the Earth.Instead, we need to face the “inconvenient truth” and take tangible actions.The prominent strategy goes with global GHG emission reduction, which is the side effect of industrialization. However, we don’t need to suspend all the industrial activities to reduce the emission, instead, we need something wiser-the use of renewable energy. To accomplish that, the wastes produced in or after the processing progress need to re-enter the industrial chain again.So, this is what we do. Everyone in DGM plays an important role in developing an easy-to-use, convenient and safe recycling method, so that every one of you can take part in this great earth-saving mission. If you are interested in how DGM protects the earth and our loved ones, please click the link below and enter our website. Let’s stay on Earth together!